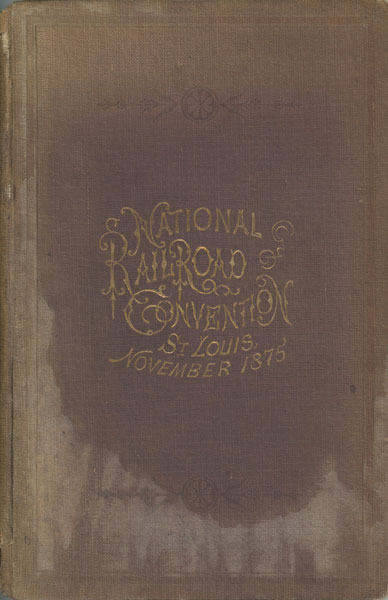 Proceedings Of The National Railroad Convention At St. Louis, Mo., November 23 And 24, 1875, In Regard To The Construction Of The Texas & Pacific Railway As A Southern Trans-Continental Line From The Mississippi Valley To The Pacific Ocean On The Thirty-Second Parallel Of Latitude. Published By Order Of The Convention, John M. Harrell, Of Arkansas, Secretary

Other works by Texas & Pacific Railway

First edition. This is the original printing, NOT a reprint. 9 1/4" x 6" in purple ribbed cloth, gilt title on front. x, 11-208 pp., appendix, index. "The proposed railroad will have at least seven Eastern terminal points on the Mississippi or the Gulf—these radiating branches meeting at some convenient point in Western Texas, and thence constituting one grand trunk line to the Pacific Ocean. The States of Texas, Louisiana, Arkansas, California and Missouri, also Mississippi, Tennessee and Illinois, with the Territories of New Mexico, Arizona, and the Indian Territory, and the Northern States of Old Mexico will be directly on the main line or its branches." The basis for this construction were several including the mildness of climate minimizes the opportunity for heavy snowfalls, at the highest point in crossing is only 5,000 feet above sea level, springs and streams are numerous, coal beds have been found along the route, the grades are light and the road will traverse for the most part level bottom lands and gradually ascending highlands. "Some of the immediate and legitimate results of the inauguration and vigorous prosecution of this work may be briefly stated as follows: 1. It will bring many millions of foreign capital into the country, to be distributed amongst iron-masters, contractors and laborers, thus contributing largely to the relief of the financial pressure throughout the country. 2. It will rekindle the fires and start the machinery in furnaces and foundries East and West, giving profitable employment to an army of idle men, either in the construction of the work or in the preparation of material. 3. It will aid in the rapid development of many millions of acres of good farming land in Texas, the Indian Territory, New Mexico and Arizona, and in the successful working of the rich silver, gold and copper mines of the two last-named Territories, and of the Northern States of Old Mexico. 4. It will bring into those regions a multitude of industrious emigrants from the older States, and from Europe, to build up mining towns, and transform a wild waste into productive farms. 5. It will do much towards the solution of the Indian question, by reason of the more rapid advance of the great army of civilization, which it will inevitably secure, thus saving to the Government millions annually in the single item of border protection. 6. It will save to the Government in the diminished cost of transporting military stores, Indian supplies, and the mails, more annually than the interest on the bonds proposed to be issued for the construction of the road. 7. It will carry the industries of civilization into the Northern States of Mexico, a country containing nearly ten millions of people, and secure to us an immense trade that is now being diverted into other and foreign markets. 8. It will secure to us a highway from the Mississippi to the Pacific Ocean, on the shortest, best and most economical route ... a line free from the obstructions of high mountains, deep snows, and the annual floods which beset the present route. 9. It will aid largely to secure cheap transportation by creating a healthy competition with the only other line of trans-continental railway. 10. It will bring increased revenue to the Government, by substituting industrious, productive communities in the place of savage hordes, now a source of enormous expense and perpetual annoyance. 11. It will resurrect and rehabilitate the South, by pouring through that fertile but distracted region of our country a perpetual tide of the world's commerce, vitalizing its railroad system, and reviving its paralyzed industries. 12. It will bring more immediate, substantial and permanent benefits to the West and South than any enterprise that has yet been inaugurated." "The Union and Central Pacific roads have received magnificent donations of money and lands, and now have the monopoly of the transportation to and from the Pacific coast. The Southwest must have a road to counteract this influence, and give accommodations to the people of the' whole country by the competition which its construction will produce. What is asked from the Government to consummate this great national enterprise? Not money, not subsidies, not loans or lands. The companies having this enterprise in charge simply ask for a guaranty of five per cent, interest on construction bonds, and offer to indemnify the Government for its indorsement by a first lien on all their property, by the surrender of 30,000,000 acres of land already granted, and the transportation of the mails, troops, and supplies; also by depositing in the U. S. Treasury $5,000 in bonds for each mile of road, to be sold by the Government if necessary to meet any possible deficiency during the period of constructing the road." A rare record of the speeches, interruptions, and discussions, by a great number of delegates from Texas, and with a list of the state delegates to the convention provided. Resolution authorizing publication of Proceedings is noted on page 149: "Resolved, That the Secretary of the Executive Committee appointed by the citizens of St. Louis, together with the Secretary of this Convention, be instructed to prepare, under the direction of said committee, the proceedings of this Convention for publication in pamphlet form, and to publish such number of copies as they may deem advisable." Front cover is badly damp-stained; spine is lacking sections at head and tail; text-block is tight and clean.

Wildcatters. The Story Of Pacific Petroleums And Westcoast …
EARLE GRAY