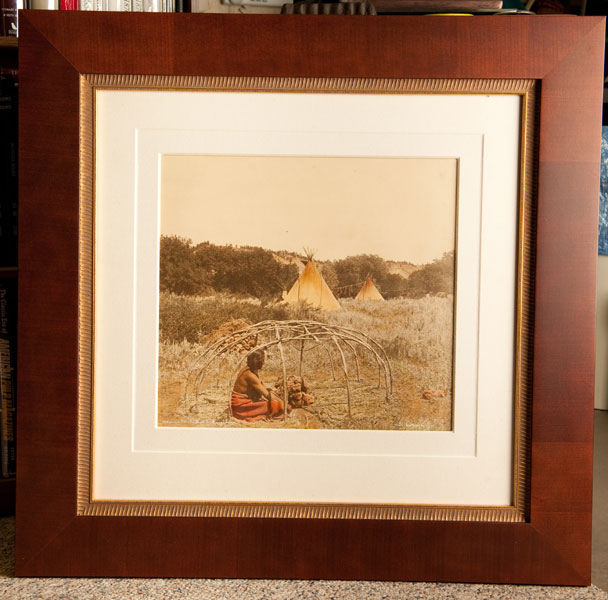 "Plenty Bird In His Sweat Lodge." 28 3/4" X 29 1/2" Matted And Framed Original Huffman Photograph, Hand Colored, Titled, And Signed By Huffman In White Ink On The Surface Of The Photograph After The Coloring Was Completed

by L. A Huffman

The original negative is a 6" x 8" glass plate and the original photograph would have been taken sometime during the 1890s. This photograph is an enlargement using the original glass plate negative. There is no way of knowing how many colored enlargements Huffman produced of this image, only that the total would not be very many. We have been told this colored image was not used on page 125, of Peterson's L. A. HUFFMAN, PHOTOGRAPHER OF THE AMERICAN WEST, because it was not known that a color image existed. Plenty Bird was a Cheyenne and Huffman said, "Plenty Bird was a friend, a good sign talker." In this photograph, Plenty Bird's wife has placed inside this lodge, some hot stones. A little later she will cover the lodge with robes and blankets and pass him in a gourd of water, which he will sprinkle upon the hot stones, until he has had his Turkish bath. When the bath is over and the steam has dissipated, he will duck out and get into the cold waters of the creek, and be rid of his ailments. A handsome photograph from a premier American photographer of the old West, and one of a kind.

Branded For Christ
by Eschol Cosby