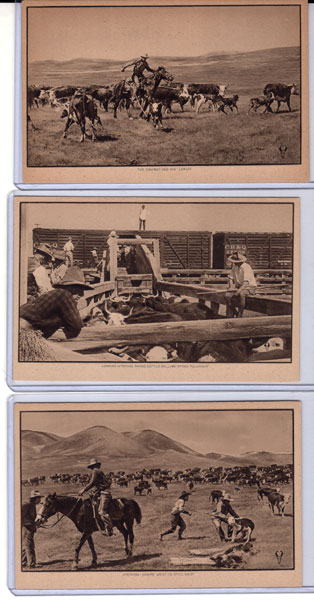 Contains twenty 9 x 14 cm (3 1/2" x 5 1/2") photogravure postcards with undivided backs and printed in Germany and with the photograph copyright by Charles J. Belden. Seventeen of the photo-postcards show views of cowboys at work herding cattle in Pitchfork, Wyoming. Three photo-postcards views are of Native Americans showing them standing in front of the Don Fernando Hotel, a street in Taos Pueblo, and standing in a doorway in Taos. Charles J. Belden (1888-1963) was born in San Francisco into a wealthy California family. He developed a life-long passion for photography when he purchased his first camera to record his travels throughout Germany and Russia after graduating from the Massachusetts Institute of Technology (MIT) in 1909. Upon his return to the United States, Belden worked as a cowboy on the L. G. Phelps Ranch in Wyoming. He then went to work on and eventually managed the legendary Pitchfork Ranch near Meeteetse, Wyoming. During his time at the Pitchfork Ranch between the 1920s and 1930s, Belden produced a variety of images that captured life on the dude ranch, including livestock activities, as well as the surrounding western landscape. Many of his western photographs were taken on horseback aboard his reliable pony, Pinkie. He thought this gave him the desired perspective he was hoping to achieve. Belden's photographs have been featured in many publications including books, the National Geographic and the Saturday Evening Post magazines. The three Taos images are uncommon as Belden does not have much published in this regard. All of the photo-postcards are in fine condition.

The Other 49ers, A Topical History Of Sanpete …
ANTREI, ALBERT C. T. [EDITOR]