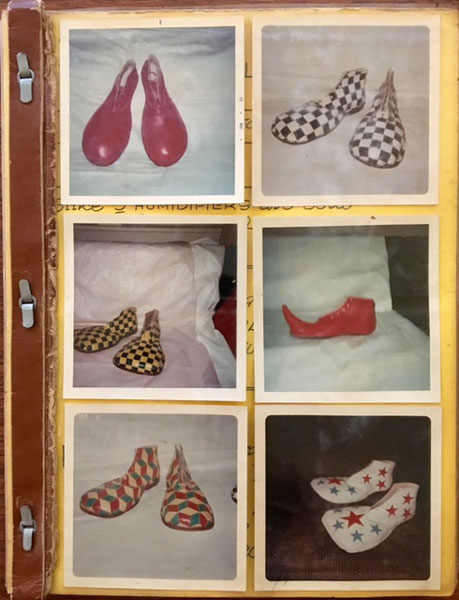 Photograph Album Collection Of Theatrical Shoes. An Unusual And Exceptional Photograph Collection Of 140 Photographs Documenting The Acrobatic, Theatrical, Circus, And Clown Shoes And Boots Manufactured By The Storied Griffin Theatrical Shoe Company In The 20th Century. The Images Include Acrobatic And Wire-Walking Boots, Riding Boots, Clown Shoes For Sketches As Rubes, Hobos, And Many Other Outlandish Oversize Footwear

First edition. Three volumes. Vol. I: Oblong 4to. 12 x 9 in. 17 leaves of silver gelatin photographs, many linen backed, and mounted with linen hinges, nearly all 8" x 10," one sized 5" x 7 1/2" mounted on recycled card stock, nearly all with Griffin Theatrical Shoe Co. stamp on verso. Contemporary 3-ring binder, with Griffin Theatrical Shoe Co. label on front pastedown, patent numbers on verso indicating 1918 date. Minor rubbing and edgewear. Vol II: -- 4to. [20 leaves (unnumbered).], transparent polyester sleeves, with 33 photographs sized from 1" x 1 1/2" up to 8" x 10," with two of the larger photographs hand-colored, several mounted on boards with markings as camera-ready copy, some with annotations on versos, or in lower blank margins, also contains a small 20 pp. illustrated dealer's catalogue, with annotations throughout indicating prices, and price breaks, and an NRA eagle on front cover. All contents are preserved in a 3-ring binder, with company name stamped in gilt on the front cover. Vol. III: 4to. 18 pp (unpaginated), with 90 photographs (most in color), sized from 2 1/2" x 3 1/2" to 3 1/2" x 5," with many dated in the margins, all mounted in re-purposed split-pin transparent plastic binder sleeves. A few of the plastic sleeves have tears but all of the photographs are protected. This fascinating photo collection offers splendid visual documentation of this company's influential role as one of the most important manufacturers of theatrical shoes, clown shoes, acrobatic and high wire shoes, riding boots, and more from before World War I into the 1970s. James R. Griffin (1853-1935), immigrated to the United States in 1873, and quickly established himself as a shoemaker in Rochester, NY. He founded the Griffin Theatrical Shoe Co. in 1882, and by the beginning of the 20th century was producing theatrical and clown shoes for such outfits as Buffalo Bill Cody's riders and rodeo clowns. Before World War I, the shop also listed his sons Herbert, Raymond, & Adrian working with him. Raymond Griffin (1896-1978) who had previously worked with the railroad, later set up the Theatrical Shoe business at home about 1920 on Seneca Road in Irondequoit, NY. He continued the tradition of specialty handmade footwear for circus acrobats, tight and high wire walkers, and every variety of colorful and amusing shoes for clowns and vaudeville acts. The catalogue and the photographs illustrate the acrobatic and high wire-walking boots, leather sandals, low sandals which were canvas lined, double shoe clown shoes, in a variety of styles including chicken feet, rube comedy, hobo shoe, checkerboard pattern, slop shoes and more. The Griffins also produced a line of comedy boxing gloves produced from soft elk skin. Whenever Big Top circuses traveled through outfits Rochester, NY, or other upstate towns as far away as 150 miles, the Griffin shop received visits from circus notables such as the Wirth Family, the Flying Cordonas, or famed clowns such as Emmett Kelly, Jr., Felix B. Adler, or Paul Pugh (Guppo the Clown). Eventually John Bucholtz, Jr. inherited the business from his grandfather in 1976, and even was invited in 1980 to put on a special exhibition of all the circus and theater performers who had worn Griffin's special shoes. Although there are anecdotal histories citing 1915 as James Griffin's death, Dec. 1935 is cited by the 1937 Rochester Directory leaving Kate C. Griffin as widow. See:Donavan A. Shilling, Made in Rochester, pp. 90-91; Betty Lipka, Griffin Shoe Company, Democrat & Chronicle (June 21, 2002); Colleen McBride, The Griffin Collection, Rochester Museum & Science Center, 1998 (the bulk of this collection consists of approximately 700 order letters from 1916 through 1965, with no photographs). An impressive archive in very good condition.