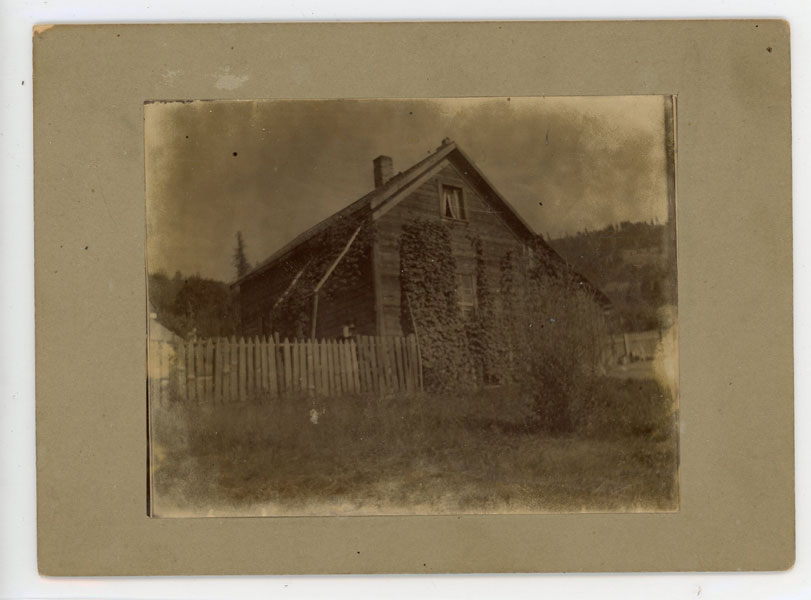 11 3/4" x 11" cream-colored vinyl 3-ring binder housing [74]pp. which contain 60 photographs (5 albumen, sized from 4" x 5" up to 7 3/4" x 9 3/4,") mounted on studio card stock, sized from 2 1/2" x 4" up to 8" x 10." Nearly all photographs with typed captions below in lower margin, on verso, some with manuscript annotations in pencil on versos, 1 real photo postcard with manuscript annotation on verso; 65 newspaper and photostat clippings and news stories, Xerox copies of documents, many dated or with annotations; 2 signed letters to Lowell Woods, Lizzie McKellar, 1 autographed letter signed and dated 1903 addressed to Bess McKellar [Woods], all preserved in mylar sleeves. This intriguing photo album/scrapbook documents the lost ghost-town of the Old Kettle Falls, Washington, now beneath the waters of the Lake Roosevelt reservoir. The original Kettle Falls was officially incorporated on December 17, 1891 on the bank of the Columbia. After it was flooded by the Grand Coulee Dam in 1940, city planners relocated the town at a community called Meyers Falls, near the railroad lines, helping to ensure its success as a trans-shipment point for the logging, agriculture, and paper industries. This is its present location, eight miles northwest of Colville and roughly 80 miles northwest of Spokane. The album is assembled with photographs, documents and clippings of the Kettle Falls by the Washington pioneering family led by Lizzie McKellar and her husband Dougald, who have included photographs of the family homes, relations, community efforts, and the moving of Kettle Falls, Washington, by the Works Progress Administration during the construction of the Grand Coulee Dam. These photographs, documents, and clippings detail the history of the McKellar and Woods families in and around the original Kettle Falls,Washington, area, now a ghost town underneath the waters of Lake Roosevelt behind Grand Coulee Dam. The Kettle Falls had been considered the Niagara Falls of the Washington Territory and served as a site where the Colville, Spokane, San Poil, Okanogan, and Kootenai Tribes would meet to fish salmon, and also where the Hudson Bay Company placed Fort Colville in 1826. Lizzie McKellar (1858-1953) and her husband Dougald McKellar (1852-1923) homesteaded near Colville, Washington, by 1877 and in 1889 moved to the newly platted town of Kettle Falls where Lizzie opened the Rochester Hotel and boarding house, which also housed the local post office, while her husband opened a livery stable and stage line to Republic, Washington, to supply gold miners and speculators. A photocopy of the original receipt for payment of $100.00 to the Rochester & Kettle Falls Land Co. is included here. Three of the albumen images show the first and second homes on the McKellar ranch which also included a smoke house, wash house, cider press house, and weaving loom house, with many of the extended family members and friends identified. Several of the photos show the Old Baptist Church under construction and overseen by Grandma McKellar; several photos of the Lowell Woods fruit ranch and orchards; the Ross’s store being moved from Old Kettle to New Kettle; Dougald McKellar’s livery stable; the old main street; schools; and more. Also included are images of the Women’s Relief Corps picnic with the Grand Army of the Republic at the McKellar Ranch in 1911; a July 4th picnic at McKellar Ranch in 1917; and a family picnic in 1914 with all participants identified in supporting manuscript list. Occasional toning, offsetting, and minor wear, with some mylar sleeves having chipping or creasing. A very good exemplar.

A History Of Limestone County Texas, 1833-1860
by Hampton Steele

This Is Not A Book, Just Memories
by Roy P. Drachman

Bravo Of The Brazos. John Larn Of Fort …
by Robert K. Dearment