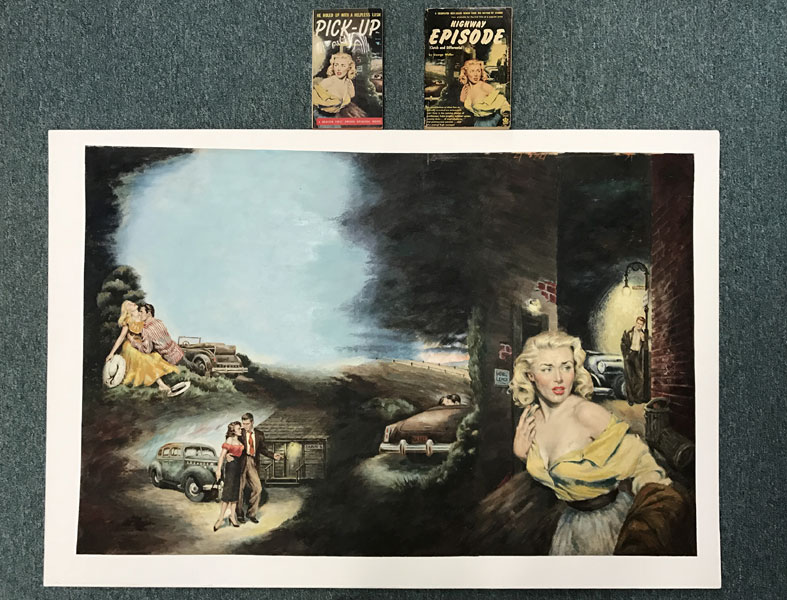 Original artwork by Frank Uppwall (1900 - ), rendered in oil on art board. A single sheet measuring 24" x 36 3/4," dry mounted to an art board for an overall size of 27" x 40." Signed by the artist at the lower center of the painting. This is a colorful and stunning cover painting for Charles Willeford's "Pick-Up," his second book issued as a paperback original by Beacon in 1955. A nihilistic early novel following "the pilgrimage of two lost and self-destructive lovers through the depths of San Francisco, from cheap bars and rooming houses to psychiatric clinics and police stations" (Polito, Robert (editor) Crime Novels: American Noir of the 1950s, Library of America). Though the image at the far right of the painting is the most recognizable, the artwork first saw publication as the wrap-around cover art for George Weller's "Highway Episode" published by Royal Giant # 21 in 1953. Upwall's painting ranks among the earliest original artwork for a Willeford novel of which we are aware. Included with this original artwork are first edition copies of "Pick-Up" (in fine condition) and "Highway Episode" (in very good condition). The artwork is in fine condition beautifully mounted and framed.

The Key To Rebecca.
KEN FOLLETT

The Fields Of Death.
SIMON SCARROW