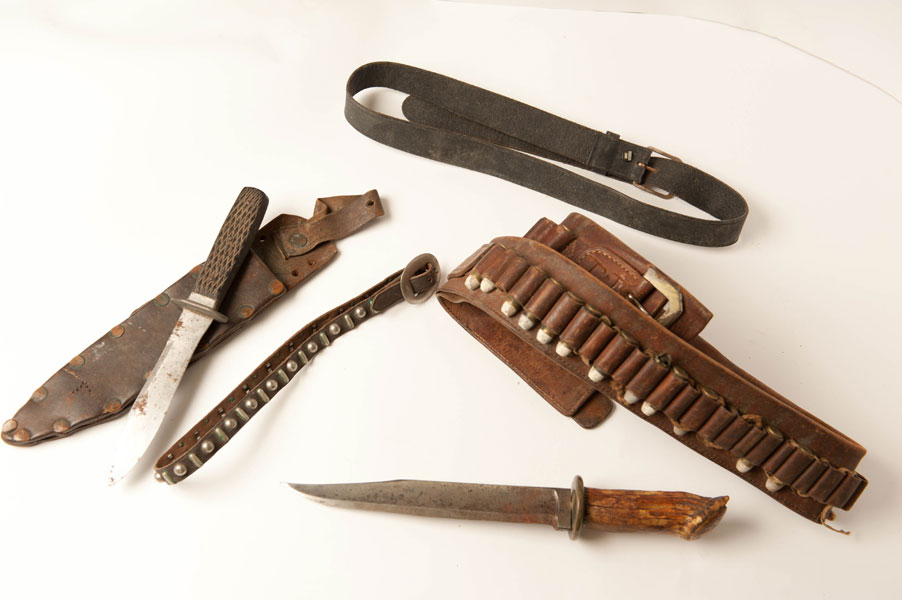 According to a facsimile typed letter dated August 21, 1920, that was signed by Historian and Author E. A. Brininstool, "this old belt, knife, knife scabbard and pistol holster were carried by a notorious horsethief who was shot and killed in South Dakota by Capt. George Bartlett, U.S. Deputy Marshal, in the early '80's. They were presented to me by Capt. Bartlett, and in turn are herewith presented to my good old pard, L. H. Spragle, to hang in his den as a memento of wild days on the frontier of Dakota. It will be observed that one shell is nicked on the head. Bartlett's bullet struck the shell, glanced off and went through the thief's body. The shells in this belt have never been taken out since the man was shot. E. A. Brininstool." In a second facsimile typed letter from Brininstool dated March, 21, 1921, the first paragraph says "Yep, you're right. You got that belt, holster and knife and scabbard. I did have the saddle, but had no place for it and sold it some years ago. I helped bury Bartlett here when he died some ten years ago or so, and my Indian stuff is the dope he had. Better hang on to this story and you have the goods to show along with it." L. H. Spragle and E. A. Brininstool first met in Reno in 1910 or so when they each were in the process of divorcing their wives. While the process was running its course they roomed together in a tent city and apparently had quite a time together. Spragle returned to Pennsylvania and he and Brininstool carried on a life-long friendship and correspondence. We find in an article by Jeff Gill some comments about Capt. George Bartlett but no references to the "notorious horsethief." Gill says "... a fascinating character named George E. Bartlett, a U.S. Marshall for Pine Ridge and a city west of there already infamous as Deadwood, South Dakota. Bartlett had worked as a sales representative for the gunpowder company owned by relatives of Warren Moorehead (his King family relations from Xenia, this apparently being the reason he and Bartlett knew each other in the first place), and also ran a small trading post of his own on a creek through part of the Pine Ridge Reservation.

The Armstrong Chronicle. A Ranching History
by Diane Solether Smith

Brass Checks And Red Lights. Being A Pictorial …
by Fred And Jo Mazzulla