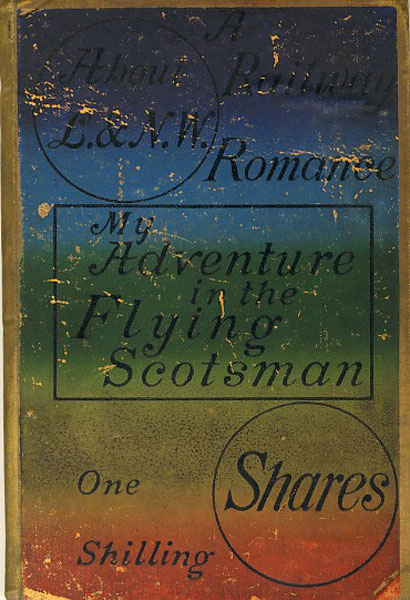 My Adventure In The Flying Scotsman: A Romance Of London And North-Western Railway Shares.

First edition. Rainbow-colored, cloth front cover and tan rear cover, 63 pp. Front cover moderately rubbed, else a very good copy of a rare book. This book was considered to be rare in 1951, when Queen's Quorum was originally published. Queen's Quorum 13 says "In 1888, Eden Phillpotts's first book marked the beginning of one of the most prolific writing careers of our time. .... .... cornerstone honor should be accorded to Mr. Phillpott's maiden mystery, the thin, fragile book with the 'rainbow' stamping which is seldom found even in the so-called complete collections of Eden Phillpott's work. Modern readers will undoubtedly agree that MY ADVENTURES IN THE FLYING SCOTSMAN is an old fashioned tale of theft and attempted murder, relying a bit too strongly on the long arm of coincidence, but peopled with richly Victorian characters caught in the fell clutch of melodramatic circumstance." Housed in a clamshell case with the book's front cover design on the front panel.

The Problem Of The Wire Cage.
by John Dickson. Carr

The Soul Slayer.
by Paul. Doherty

The Eighth Dwarf.
by Ross. Thomas