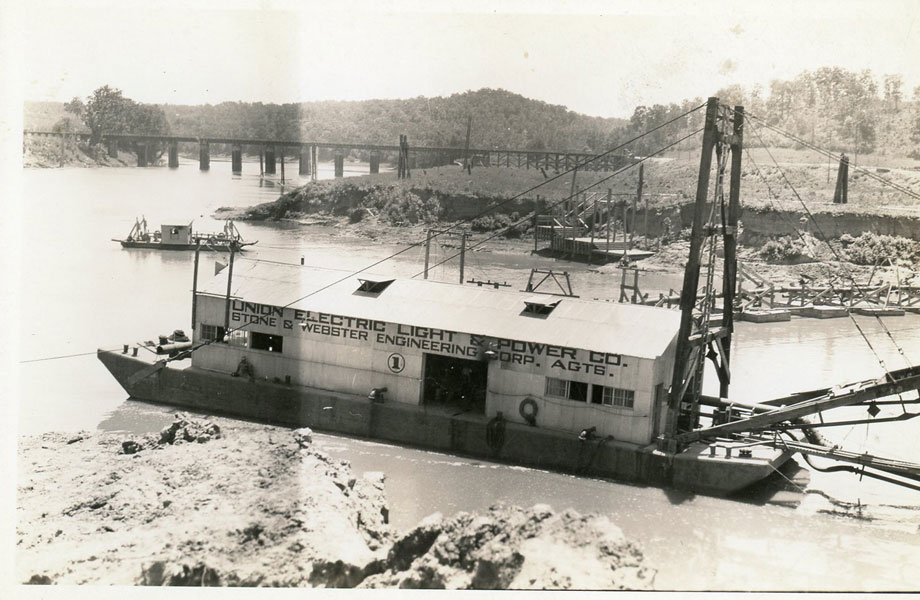 140 silver print black and white photographs, most in real photo postcard format, measuring 3 1/2" x 5 1/2," with six smaller snapshots. Images often identified in the negative. A large and captivating group of nearly 150 real photograph postcards and several original photographs that document the construction of the Bagnell Dam on Missouri's Osage River during the beginning of the Great Depression. The project, headed by the Union Electric Company of St. Louis, is broadly captured in this rich assembly of typically clear and well executed views focused primarily on construction methods and equipment, with several views also featuring labor and one series showing the ramshackle "Main Street" of an upstart worker village dubbed Damsite, Missouri. Six vernacular snapshots bear verso stamps of the Kilgore Studio of nearby Eldon, Missouri and several more are marked Haarstick Photo of Damsite, a real photo postcard studio that appears to have set up shop in the worker camps specifically to sell commercial images of the project. With the onset of the Depression shortly after construction began, it seems plausible worker outlays for souvenir photographs may have been less liberal than an enterprising photographer would have expected. Perhaps as a result, photographs of the dam's construction, particularly anything nearing the volume of the present collection, are quite uncommon, with only the Missouri State Historical Society seeming to record any substantial visual record of the dam's construction, a modest eighteen prints in its Frank Reynolds photograph collection (including several with the Haarstick mark). When completed, the dam's hydroelectric power plant produced much needed power for nearby Kansas City and created the Lake of the Ozarks, one of the most popular tourist destinations in the Midwest, but practically ended transportation on the Osage River to the Mississippi. The construction of the dam created 1,000 miles of new lake coast line in Central Missouri, which profoundly changed the environmental, social, and economic fabric of the region, and also employed thousands of workers during the bitter, early years of the Depression. In all, a striking collection of images that documents one of the most significant dam projects undertaken in the American Midwest. Scattered contemporary ink stamps, versos mostly blank. Mild curling at edges; very light wear at corners. Very good.

Murder In Tombstone. The Forgotten Trial Of Wyatt …
by Steven. Lubet

Death Down East
by Hayden Norwood