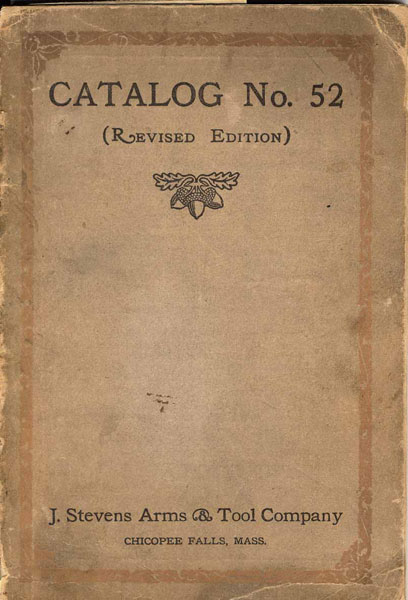 Revised edition. 8vo. Printed wrappers, 159 [1] pp., illustrated, index. This catalog supersedes all previous editions. Provides a bit of history of the company along with information on their more popular products. Illustrations and pricing for all of the products listed in the title. Stevens Arms was an American firearms manufacturer founded by Joshua Stevens in 1864 in Chicopee Falls, MA. The company introduced the .22 Long Rifle round and made a number of rifle, shotgun, and target pistol designs. By 1902 they were advertising themselves as "the largest producers of sporting arms in the world".[1] They were purchased by New England Westinghouse on 28 May 1915 and again by Savage Arms on 1 April 1920.[2] As a division of Savage, Stevens continued to produce firearms at their Chicopee Falls facility until 1960 when the plant was torn down and Stevens production was moved into other Savage facilities. Savage dropped the Stevens name in 1991 but revived it in 1999 and still uses it today for a number of its low cost rifles and shotguns ---- Wikipedia. Rear cover missing, front cover soiled, spine worn, chips to the margins of pages 159 and 160, else a good, solid copy.

The Bad Man Of The West
by George D Hendricks

How To Paint. Directions For Applying Paint And …
Sears, Roebuck & Co., Cleveland, Ohio