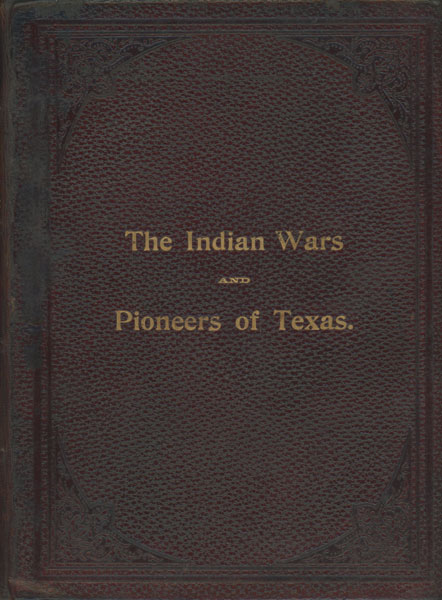 Indian Wars And Pioneers Of Texas

First edition. Thick quarto. Full brown morocco with front cover professionally restored in full leather, decorated front and rear endpapers, 762 pp., all edges gilt, double column, dedicatory preface, introduction, illustrated, portraits, index. Information on the Cherokee Indians and their 12 Associate Bands; the Cherokee and Tshuacana Fight of 1830; the first settlement in Gonzales in 1825 and its attack by Indians in 1826; the Battle of San Saba in 1831; the scalping of Willbarger and the death of Christian and Strother in 1833; the attempted settlement of Beale's Rio Grande Colony in 1834; the Fall of Parker's Fort in 1836; the break-up of Bell County in 1836; Erath's Fight; Texas' Independence; Cordova's rebellion in 1838-9; etc. Basic Texas Books 23 says "This is Brown's most important book and one of the best works on Texas Indian fighters and early pioneers. The information was gathered over his entire fifty years in Texas, and the text was completed shortly before his death. Most valuable of all are accounts of the numerous fights and skirmishes between early Texans and Indians. Only in J. W. Wilbarger and A. J. Sowell does one find a comparable amount of historical data on this facet of Texas history. Brown was himself a participant in some of the bloodiest battles." "This is one of the major historical compilations on Texas, replete with firsthand information gathered by brown over a fifty-year period, with numerous original accounts of Indian fights on the Texas frontier. Brown himself played an active role in Texas Indian wars, moving to Texas in 1837 and fighting in border skirmishes in the early 1840s" - Reese, Best of the West 223. There are many photographs of early prominent Texans, along with a biographical sketch of more than 536 pioneers. Rear free fly leaf is missing, front free fly leaf has been professionally repaired and signatures resewn and spine professionally replaced by a master conservator, else near fine, tight copy of a very scarce book.

Women In Texas. Their Lives, Their Experiences, Their …
by Ann Fears And Crystal Sasse Ragsdale Crawford