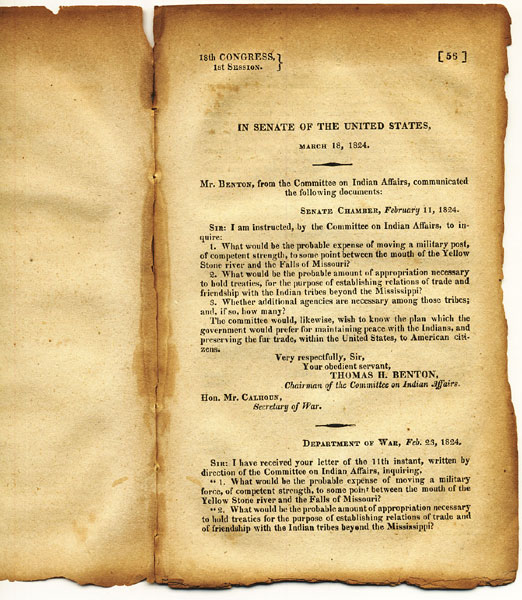 In Senate Of The United States, March 18, 1824 ... From The Committee On Indian Affairs

First edition. 18th Congress, 1st Session. 20 pp. Disbound. Correspondence from Thomas H. Benton, Chairman of the Committee on Indian Affairs, was distributed requesting the following concerns be addressed: "1. What would be the probable expense of moving a military post, of competent strength, to some point between the mouth of the Yellow Stone river and the Falls of Missouri? 2. What would be the probable amount of appropriation necessary to hold treaties, for the purpose of establishing relations of trade and friendship with the Indian tribes beyond the Mississippi? 3. Whether additional agencies are necessary among those tribes; and if so, how many? The committee would, likewise, wish to know the plan which the government would prefer for maintaining peace with the Indians, and preserving the fur trade, within the United States, to American citizens." Responses offered in the report by Tho's H. Calhoun, Secretary of War; Th. S. Jesup, Quartermaster General; R. Graham, Indian Agent; Major Joshua Pilcher. Gilcrease-Hargrett p. 192. "A report of the highest importance with valuable information on the fur trade with the western Indians." Wagner-Camp 26. "Senator Benton's committee was considering the advisability of placing a military post at some point between the Yellowstone River and the falls of the Missouri." There is also information regarding trapping expeditions to the Rocky Mountains and the attack on General Ashley by the Arikaras; and Major Joshua Pilcher's answers to the same questions. Pilcher had been connected with the Missouri Fur Company for four years, but his first-hand knowledge extended only as far as the Mandan villages. He devoted most of his statement to a history of the Blackfoot and Arikara hostilities and to comments on methods of dealing with various tribes in the northwest." Page edges browned and fragile. A very important and interesting report.

Letter From The Secretary Of The Interior, Recommending …
by J. P Usher