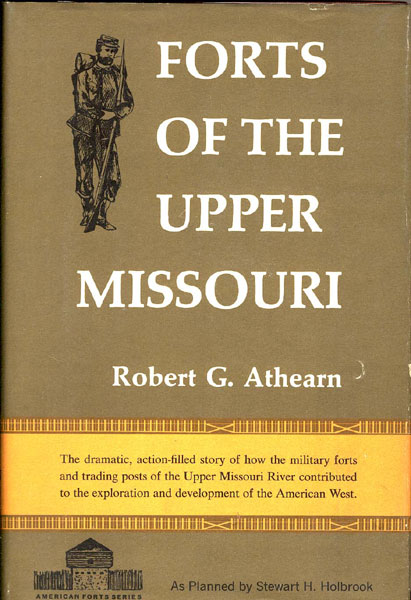 Forts Of The Upper Missouri.

Other works by ROBERT G. ATHEARN

First edition. 8vo. Two-tone decorated cloth, xi [1], 339 pp., maps on endpapers, preface, illustrated, bibliographical essay, notes, index. President James Monroe recommended the creation of a series of military posts along the upper reaches of the Mississippi. The objective was to expand contact with the Indians, exploit trade with British companies, and offer protection for settlers. In 1819 exploration began along the Upper Missouri and eventually the string of military posts was established. The American Fur Company began the first full-scale development of the area, and it was Astor who built Fort Union which became a bastion of traders, travelers, and explorers. As other forts expanded into the Dakotas, Iowa, Minnesota, Montana, and the gateway of the upper Rockies it allowed for more settlers, but it also led to hostilities between the various Indian tribes. Dramatic, action-filled story. Fine in dust jacket, lightly rubbed and with light wear to spine ends and the extremities.

Letter From The Secretary Of The Interior, In …
C DELANO

How To Carve Leather, Featuring The Abc's Of …
AL STOHLMAN

Six Months In The Gold Mines: From A …
E. GOULD BUFFUM