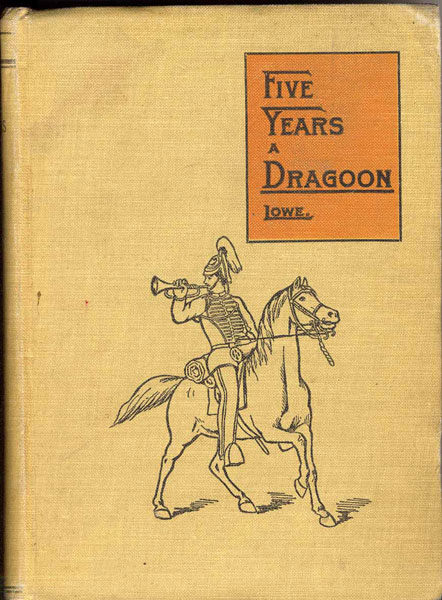 Other works by PERCIVAL G. LOWE

First edition. Decorated cloth, 417 [1] pp., frontispiece [portrait of the author], preface, illustrated, plates, portraits, index. A classic account of Army life on the western plains in the 1850's. "Percival G. Lowe spent nearly twenty years traveling the Great Plains, first as a dragoon recruit, then as a master of transportation, and finally as the operator of a freighting company. His recollections cover the period between the Mexican War and the Civil War when the frontier army was concerned with establishing outposts in the vast new territory in the West. The author’s experiences were many and varied. He was one of 270 soldiers assigned to a meeting of sixty thousand Indians near Fort Laramie in August, 1851, arranged by the Indian Office to promote peace among the tribes and between the tribes and the government. He was in charge of securing supplies for building Fort Riley, Kansas, when a cholera epidemic one of the worst in the history of the army broke out. The first job of his freighting company was to transport mining equipment to the Pikes Peak area during the gold rush. Lowe’s accounts vividly portray the life of a recruit and a civilian during a stirring period of national development." Lowe was present at the Government's meeting with 60,000 Indians near Ft. Laramie in August, 1851. One small spot to the fore-edges, covers lightly soiled, else a very good copy

A History Of The Western Boundary Of The …
MARSHALL, PH.D., THOMAS MAITLAND

The Story Of The Blackfeet.
JOHN C. EWERS

My Life And Experiences Among Our Hostile Indians. …
MAJOR-GENERAL O. O. HOWARD