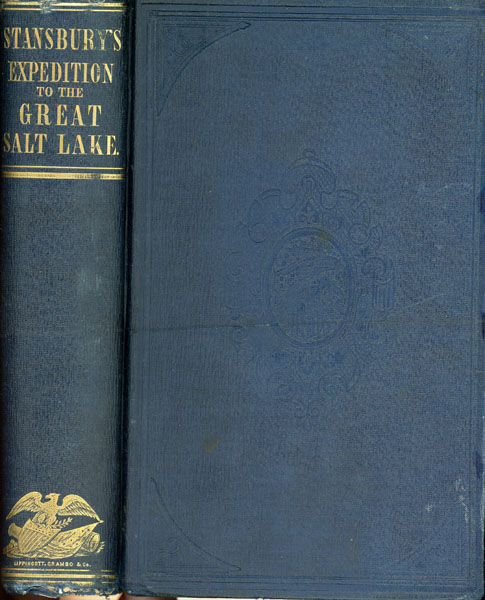 Exploration And Survey Of The Valley Of The Great Salt Lake Of Utah, Including A Reconnoissance Of A New Route Through The Rocky Mountains

Other works by CAPTAIN HOWARD STANSBURY

Two volumes. First Edition, first issue with the American sheets printed in Philadelphia, the original binding done for this issue, the headline for "Special Session" Senate Document No. 3, Special Session, March, 1851. Official Edition, first issue (the second issue being for the House of Representatives). "Illustrated by numerous beautiful plates from drawings taken on the spot", these being a profusion of 59 fine Ackerman lithographs, many tinted in colour and several folding, many engraved plates and a folding La Hontan map. The two large folding maps are present in the original atlas volume accompanying the text volume. Tall 8vo, in the original dark-blue cloth binding created for the Senate issue, with blind embossed covers featuring an American Eagle within ornate blind stamped framework surrounding the borders of the covers, the spine gilt lettered and with "Lippincott, Grambo and Co." in gilt with another American Eagle seal and gilt ruling. The atlas volume in the original brown cloth as issued. 487 pp.; the atlas with the two large folding maps. A very handsome, unusually bright and well preserved copy of this scarce and important book, especially so for being in the publisher's blue cloth binding. The hinges are strong and tight and the text is still clean, the foxing always found on this title is not present to any degree and if so, is very light. The maps are especially well preserved and in quite excellent condition. An unusually nice set. FIRST EDITION OF THIS SCARCE AND HIGHLY IMPORTANT AMERICAN WESTERN TRAVEL NARRATIVE, an early work on the Mormon's in the Utah Territory and one replete with many fine lithographs and engraved plates. Stansbury's account of explorations from Fort Leavenworth to Great Salt Lake passes through a vast territory at that time only vaguely known to the outside world. His report of this very noteworthy military expedition is of great value for numerous reasons. Stansbury was a scrupulously honest and careful observer, thus his record of the physical features of the land, and of the people of the country through which he passed, is unsurpassed. He had liberal views of the Mormons, who were at that time considered highly suspicious by almost everyone outside of their community. Thus his writings were not based on hearsay or rash opinions but on a year's intimate acquaintance and close study of them, which was unique. The appendices to the report by various naturalists, complete with fine engraved plates, further enhance its scientific value. The maps are very large, folding and are of the Great Salt Lake and Adjacent Country in the Territory o Utah Surveyed in 1849 and 1850...and of Fort Leavenworth on the Missouri River and the Great Slat Lake in the Territory of Utah. The route taken by Stansbury's expedition would become in later years that used by the famous 'Pony Express' mail service.

Sun In Their Eyes
MONTE BARRETT

The Heraldry Of The Range.
J. EVETTS HALEY