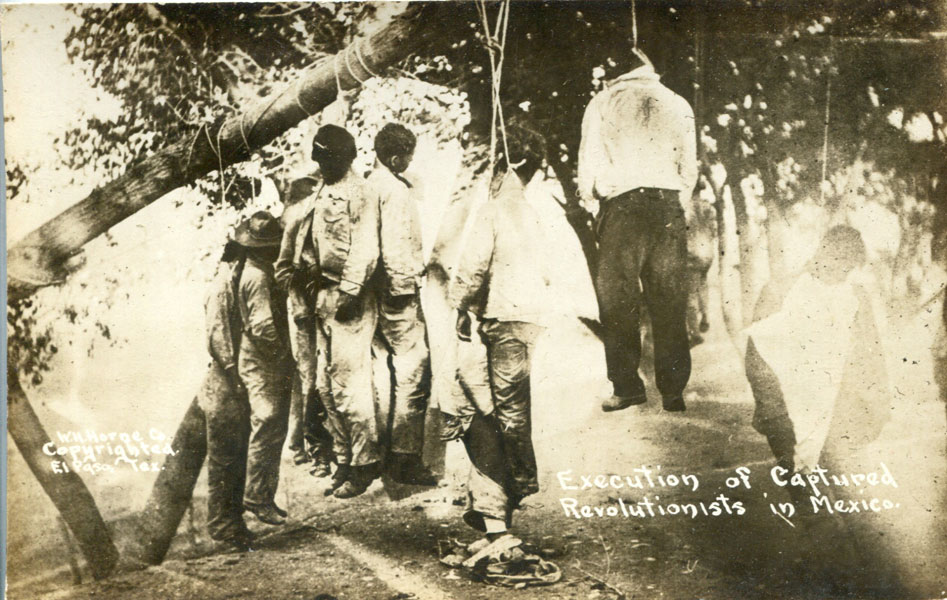 Execution Of Captured Revolutionists In Mexico

3 1/2" x 5 5/8" postcard. In 1911, the Mexican Revolution heated up in the area of Ciudad Juarez, near El Paso, Texas. W.H. Horne, who had moved to El Paso to recover from tuberculosis, purchased a camera to start a business selling postcards of battles and other scenes related to the war. By 1916, he was paying Mexican military members for the right to photograph executions. When Pancho villa attacked Columbus, New Mexico, Horne was the first photographer on the scene. This harrowing image was copyrighted the same day as Horne's more common postcard, "Execution of 256 Men." This is a closeup of the far right side of that postcard, with additional "revolutionists" in the scene. There seems to be little documentation regarding what this depicts, but the El Paso Public Library has a copy negative of "256 Men" with the note that the hanging was ordered by Mexican Federal General Murgia and that it took place in Chihuahua. On rear of postcard is neatly written: "Dear Clay! - Can people who do these things be benevolently assassinated? Kind regards to you & Mrs. T. Eg." Postcard was never addressed, stamped or mailed. Light edge wear else very good.

Scouts, Spies, And Heroes Of The Great Civil …
by Captain Joseph Powers Hazelton