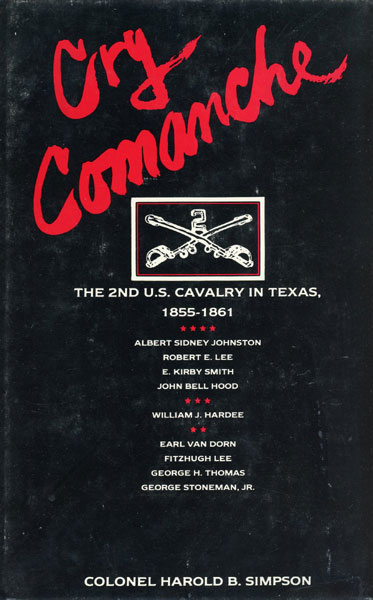 by Colonel Harold B. Simpson

First edition. 8vo. Cloth, xii [2], 186 pp., preface, acknowledgements, illustrated, plates, portraits, maps, appendix, bibliography, index. The original 2nd U. S. Cavalry was activated on March 4, 1854, by act of Congress and signed into law by President Pierce the following day. It was an elite organization as the officers were handpicked by Secretary of War Jefferson Davis and the great majority of them were Southerners by birth and West Pointers by education and training. They had the finest horse stock and were furnished with the newest and best arms, accouterments, and equipment. It was authorized to serve on the Texas frontier and border. During that time, 1855-1861, the Regiment was involved in some 40 Indian engagements, scores of patrols, several long reconnaissance missions and numerous escort parties. All but four of their battle actions occurred within the borders of Texas. While the Regiment had an activation span of only six years and five months, it provided 16 Civil War and two Spanish-American War generals. Inked gift inscription at top of front free fly leaf, else fine in lightly rubbed dust jacket.

Old Ranches Of The Texas Plains.
Mondel Rogers [Paintings By]