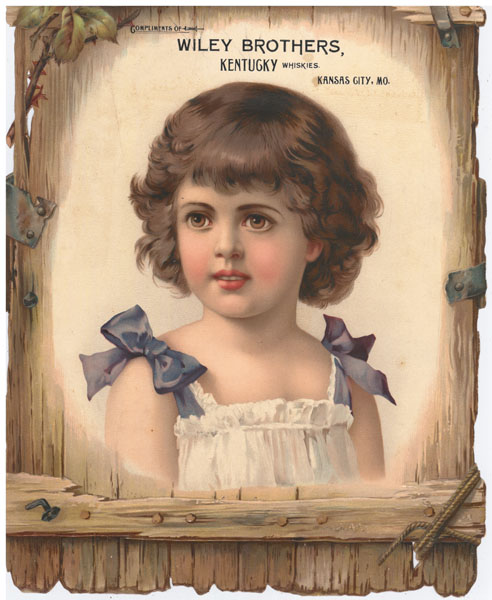 Other works by WILEY BROTHERS CORPORATION

First edition. 12" x 10" cardstock advertisement showing the picture of a lovely young girl from the chest up wearing a white dress with purple ribbon ties appearing to be looking out of a barn door. After mustering out of the Union Army at the end of the war and returning home, Searcy in 1886 is recorded as having purchased a distillery, that had been established in Anderson County in 1818 by Joe Peyton, widely known as “Old Joe.” Under Searcy’s leadership, the distillery flourished. He added structures and boasted two bonded warehouses and a third “free” (not under the Bottled-in-Bond Act) warehouse. Federal revenue records indicate his active inputs of raw whiskey into the bonded warehouses and subsequent withdrawal of aged liquor. At one point the former soldier called the facility the Zeno Distillery Company but after 1898 dropped that name in favor of The Wiley Searcy Distillery. After running the distillery successfully for decades, a fire in 1909 and advancing age caused him to sell it in 1911 and retire. Very minor wear to top edges along with aged tanning to rear else fine condition. A very attractive advertising piece.

Out There, Essays On The Lower Big Bend
BEN H. ENGLISH

A History Of The J A Ranch.
HARLEY TRUE BURTON