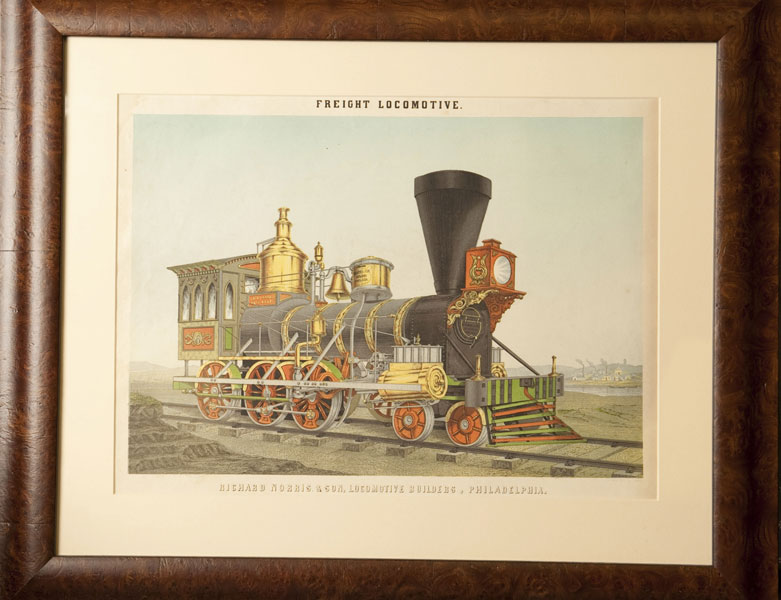 16 5/8" x 11 3/4' lithograph image, matted and framed to a 25 1/4" x 21" total size. In 1856, J. H. Colton & Co., issued a Philadelphia commercial edition of its ATLAS OF AMERICA, on the cover of which was stamped "Colton's Atlas With Business Cards of the Prominent Houses in Philadelphia, Commercial Edition." This was an atlas in which the Colton firm sold different size advertisements to be placed within the atlas, so that among the fine maps of North and South America which appeared in all their atlases, this version included numerous advertisements for Philadelphia business firms. Among these was this colorful lithograph of a freight locomotive built by Richard Norris and Son Company of Philadelphia. The freight engine is owned by the Ohio-Indiana Railroad, whose name is positioned in front of the cab. The company's name appears twice on the engine. The print was lithographed by L. Haugg, and printed in color by A. Brett. While the imposing freight locomotive dominates the picture, to the right and in the background is a view of the Norris & Company factory. A bright, colorful, and imposing image of the freight locomotive makes this a highly desirable train print of the leading and largest locomotive manufacturer in the United States, if not the world, during the 1850s. Fine.