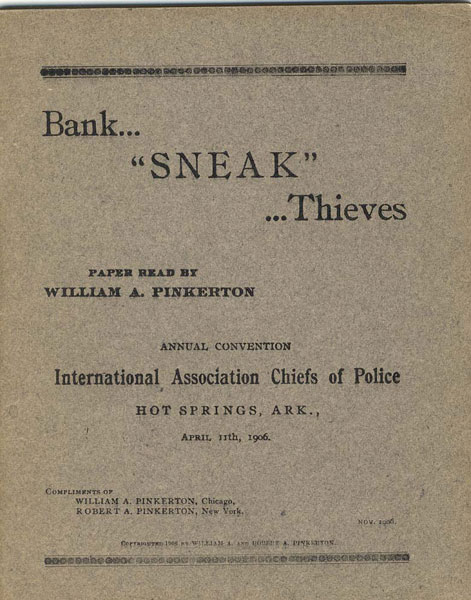 by William A. Pinkerton

First edition. 6 3/4" x 5 1/4" stiff, stapled, gray printed wrappers, ruled in black, [6], 9 - 52 [2] pp., illustrated, portraits, advertisements. Illustrated with 27 portraits from photographs and a drawing; Twin brothers William and Robert Pinkerton (1848 - 1907) joined their father, famous Scottish-American detective Allan Pinkerton, and his Pinkerton National Detective Agency in the 1860s and became its co-directors after Allan's death in 1894. The address, presented by William, focused on bank robbers and described in detail "the sneak" - a professional criminal of "active, alert and noiseless" stature, who depended on several presentable, articulate associates to distract the tellers and managers, while he used ingenious methods to enter the vault/the employee's cage/etc. and appropriate the money and valuables. The gallery of portraits highlighted a veritable smorgasbord of the most infamous "sneak" characters, identified by name, alias - "Bill the Brute," "Little Fritzie" - and sometimes an amusing description - "One of the greatest of his time. Now old and penniless," "Had a rule to steal the price of his breakfast before he ate it." Near fine copy.

A Second Look At Flat Top Water. A …
by J.C Dykes

Chicago: Her History And Her Adornment
by Mabel Mcilvaine