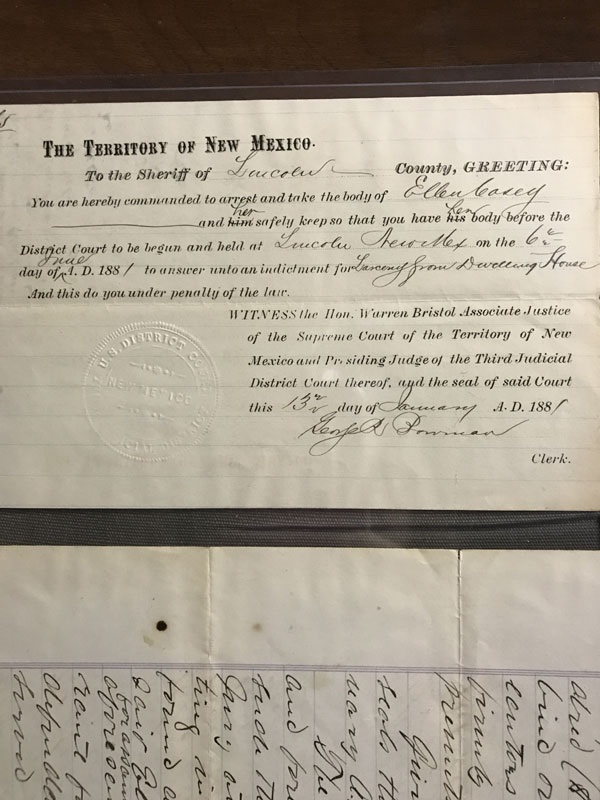 This collection consists of three items: 1. PRINTED ARREST WARRANT FOR ELLEN CASEY, SIGNED TWICE BY PAT GARRETT, LINCOLN COUNTY, NEW MEXICO, 1881. 5 3/16" x 8." Printed arrest warrant completed in manuscript on recto, docketed on verso and signed, "I Pat F. Garrett do hereby / certify that I served / the within named writ-on / the within named / Ellin Casey on the 7th / day of February. A.D. / 1881 according to the / requirements of law / Service fee $1.00 / Return 50 / Mileage 2.50 / Total $4.00 / Pat F. Garrett / Sheriff / Lincoln / County / New Mexico." On opposite half of paper is written "Bail $2000.00." Old fold and with minimal wear. Very good plus. 2. PRINTED SUBPOENA FOR FRANK MCCOLLUM AND AD CASEY, SIGNED ON BEHALF OF PAT GARRETT, LINCOLN COUNTY, NEW MEXICO, 1881. 4 7/8" x 7 3/4." Printed subpoena completed in manuscript on recto, docketed on verso and signed, "I certify that I have / served the within / subpoena on the / within named / Frank McCollum / and Ad Casey / be reading the same / to each of them / in person June 3rd/81 / P.F. Garrett Sheriff / By Wm. L. Goodlett / D.S. / Fees / Serving 1.00 / Mileage 2.50 / Return .50 / $4.00." Old fold, 3" split along right side of fold. Very good. 3. MANUSCRIPT BOND OF ELLEN CASEY SIGNED BY CASEY, ROBERT "AD" CASEY, BOB OLINGER AND PAT GARRETT. LINCOLN COUNTY, NEW MEXICO, 1881. 12 1/2" x 8." Single ruled sheet completed in manuscript on recto and verso and signed by Pat Garrett, Ellen Casey, Robert A. Casey, and A.P.B. Olinger (Bob Olinger) on verso. Robert Ameridth "Pecos Bob" Olinger was a Deputy U.S. Marshal and Deputy Sheriff of Lincoln County, New Mexico, Sheriff Pat Garrett. "Pat Garrett was elected sheriff of Lincoln County in November of 1880, and set out with a posse to chase down Billy. The kid surrendered to Garrett, and was turned over to United States Marshal Charles Conklin in Santa Fe, New Mexico, on December 27, 1880. His trial was held at Mesilla, New Mexico in March of 1881, and he was convicted for the killing of Sheriff William Brady. On April 1st Billy the Kid was sentenced to be hanged on May 13th, 1881. Following his sentencing, Bonney was moved to Lincoln, where he was held under guard on the top floor of the town courthouse. On the evening of April 28, 1881, while Garrett was in White Oaks collecting taxes, Deputy Bob Olinger took five other prisoners across the street for a meal. This left the other deputy, James Bell, alone at the jail with Bonney, who requested to be taken outside to use the outhouse behind the courthouse. On the way back to the jail, Bonney, who was walking ahead of Bell up the stairs to his cell, hid around a blind corner, slipped out of his handcuffs, and surprised Bell, beating him with the loose end of the cuffs. During the ensuing scuffle, Bonney was able to grab Bell's revolver, and fatally shoot him in the back as the deputy made for the stairs to get away. While Bonney's legs were still shackled, he was able to get into Garrett's office, where he took a loaded shotgun left behind by Olinger. Waiting at the upstairs window for Olinger to respond to the gunshot that killed Bell, Bonney called out to the deputy, 'Look up, old boy, and see what you get.' When Olinger looked up, Bonney shot and killed him." Old folds, 2" split at first and third fold. Very good. A terrific archive related to Lincoln County, New Mexico, and two people whose lives impacted Billy the Kid. Three documents likely relate to Ellen Eveline Shellenberger Casey. One is signed by Casey and two are signed by Pat Garrett, the Lincoln County, New Mexico, sheriff who shot and killed Billy the Kid on July 14, 1881. Robert and Ellen Casey were the first Anglos to settle in Lincoln County, New Mexico, working a ranch in Hondo. Robert was murdered in 1875. Ellen faced financial turmoil in 1877 which led to 209 of her cattle being sold. She stole the sold cattle as part of a plan to move her family to Texas in late October of that year. On her way out of New Mexico, she ran into the Billy the Kid who asked to join her and accused her of owning a stolen mare that she purchased from Frank McCollum. Casey's sons (one of whom was Robert Adam "Ad" Casey) begged her to allow Billy to join, but she refused. "Her departure coincided with and to some extent triggered a convergence of events that were to have a profound effect upon the life of not only the Kid but also nearly every inhabitant of Lincoln County." (Nolan, Frederick. The West of Billy the Kid, University of Oklahoma Press, 1998, p. 79). Had Billy traveled with the Caseys, he may not have gained employment with John Tunstall and been involved in the events that occurred after Tunstall's killing and the Lincoln County War. His future and Lincoln's may have been much different had Casey allowed him to come along. The Caseys never made it to Texas with the cattle and apparently fell on even harder times as evidenced by these documents. We are unable to determine the disposition of the 1881 charges against Ellen for larceny as well as assault and battery with intent to kill. While it's possible the documents relate to one of Ellen's daughters, who was also named Ellen and with a middle initial of E, that Ellen was just 15 years old at the time. A fine collection joining one of the icons of the Old West with the man who killed him and an important female pioneer.

Construction Of A Pipe Organ And Reed Organ. …
by Anonymous

"Both Sides Of The Dispute Over The True …
Nebraska History Magazine

The Bodacious Kid.
by Stan. Lynde