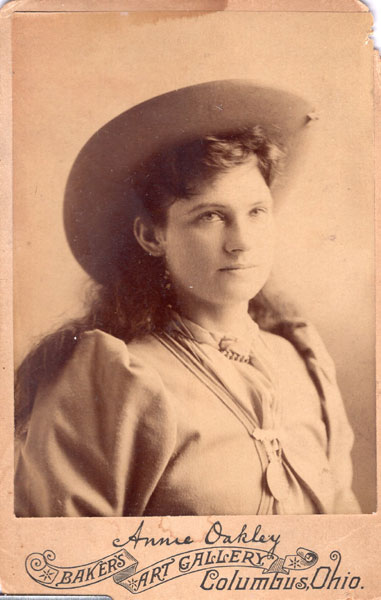 First edition. 5 3/8" x 3 7/8" photograph, 6 1/2" x 4 1/4" mount size, photographer's imprint on the front of card with Annie Oakley's lithograph signature. The Encyclopedia of Frontier Biography says: "Annie Oakley, sharpshooter (Aug. 13, 1860 - Nov. 3, 1926). Born in Darke County, Ohio as Phoebe Anne Oakley Mozee, she early was attracted to shooting and became locally famed as a markswoman, hunting game for the Cincinnati markets. Matched with sideshow marksman Frank E. Butler, she beat him; he later married her and incorporated her into his act, and when she became universally popular, he took over as her manager. They joined the Sells Brothers Circus and, in 1885, the Buffalo Bill Wild West Show; for 17 years she was a star of the organization. Some of her shooting feats were phenomenal; she was an especial success in Europe, performing before Royalty." Lamar's Reader's Encyclopedia of the American West says : ".... Oakley was acclaimed by Sitting Bull, who dubbed her Watanya cicilia (little sure shot). For seventeen years Annie Oakley was peerless wing and rifle shot for Buffalo Bill's Wild West show. She would hit a cigarette being smoked by her husband or a dime held in his fingers. After two clay pigeons had been released, she would leap over a table, pick up a gun, and bring down both targets. Her shooting of card targets gave rise to the slang term Annie Oakley for a pass or complimentary ticket, commonly punched full of holes for identification. In rifle competition she scored 943 out of 1,000 glass balls tossed in the air and 4,772 out of 5,000 in nine hours with a shotgun. The show's engagement at Queen Victoria's Golden Jubilee in 1887 brought her world fame, and she left the show for a solo tour of European capitals. She also toured with Pawnee Bill's Wild West and in the melodrama Deadwood Dick before rejoining the Buffalo Bill show in 1889 for a tour that included France, Spain, Italy, Austria, and Germany. One of the show's greatest seasons was at the World's Columbian Exposition in Chicago in 1893." This photograph shows a young, attractive Annie Oakley. Lightly worn in the margin of the upper right side else a very good copy of a young Annie Oakley. Provenance: From the Robert G. McCubbin collection.

The West Texas Frontier, Or A Descriptive History …
by Joseph C. Mcconnell

A Tenderfoot In Tombstone. The Private Journal Of …
by Lynn R. Bailey