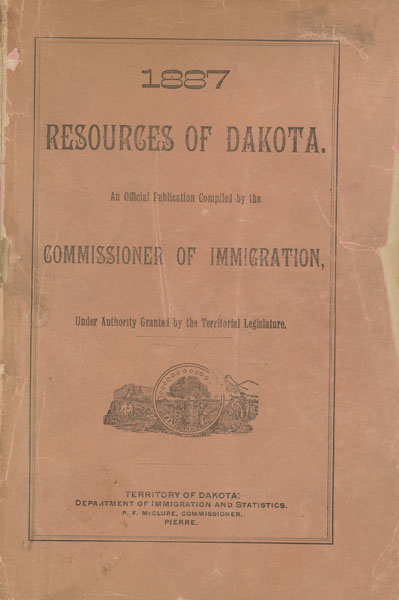 1887: Resources Of Dakota. An Official Publication Compiled By The Commissioner Of Immigration, Under Authority Granted By The Territorial Legislature. Containing Descriptive And General Information Relating To The Soil, Climate, Productions; Advantages And Development - Agricultural, Manufacturing, Commerical, And Mineral - The Geography And Topography Of The Territory. The Vacant Public Lands And How To Obtain Them; Together With Diagrams, Statements, Tables And Summaries Showing The Products And Progress Of The Territory And Of Each County Separately

TERRITORY OF DAKOTA DEPARTMENT OF IMMIGRATION AND STATISTICS

Other works by TERRITORY OF DAKOTA DEPARTMENT OF IMMIGRATION AND STATISTICS

First edition. 8vo. Printed wrappers, frontispiece of the territorial capitol in Bismarck; 498 pp; 2 colored maps; many illustrations of buildings throughout the territory; index. Printed in Sioux Falls, Dakota, by Argus-Leader Company, Printers, 1887. At the time of the publication, P. F. McClure was the Commissioner of the Department of Immigration and Statistics. The back cover has a message printed on it from McClure requesting that anyone interested in "24,000,000 Acres of Government Land in Dakota, Still Vacant and Subject to Homestead and Pre-Emption” should request “Pamphlets of every Section of the Great Territory – The Government Land Law, Etc." The long sub-title is a good summary of the contents of this publication which was produced to encourage settlement into the Dakotas in the late 19th century. The completion of a railroad system in the 1880s going east and west was a major incentive for introducing the potential of the Dakotas to potential immigrants. Scarce on the market, this booklet is a major source of information about the development of the Dakota Territory, and eventually the states of North and South Dakota. The back cover has separated from the booklet, but is present; the spine and front cover are chipped around the edges. The text block is tight and in very good condition.

Facts About Kansas. A Book For Home-Seekers And …
Missouri Pacific Railway

Remembering Carl Hertzog, A Texas Printer And His …
AL LOWMAN